The Liaison meeting discussed the area outlined in the image below. 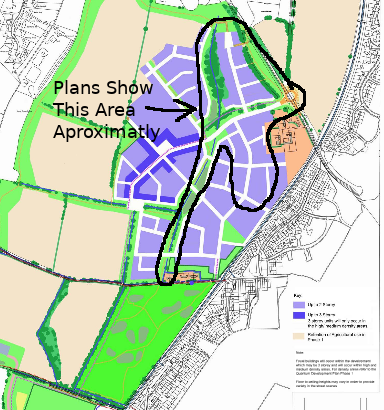 Many of the people who attended the meeting appeared frustrated that so little detail of the wider developments road layout was shown or explained.

An important point was established regarding access for people onto Centurion Way. It was agreed that the park area is not intended (and will in fact not be suitable) for cycle, pram or mobility scooter access. This is because all access to it is via sprung gates. The main purpose of this area appears to be for dog walking and the sprung gates are presumably to prevent disobedient dogs running away from their owners.

The boardwalk pathway through the green corridor area was described as a potential cycle route by the Linden Miller representatives. However this statement appears to have been made in error as close inspection of the plan shows a narrow and tightly curved pathway that would be unsafe to use as a cycle way.

The only access to dwellings currently shown on the plans, available to cycle, pram or mobility scooter users wanting to reach existing parts of the city, would be by negotiating a new roundabout off the Old Broyle Rd. Personally I would find cycling around such a roundabout an intimidating prospect at night or during rush hour. I don’t think I would attempt to negotiate this route if I had a pram or mobility scooter. Pedestrians from the new dwellings will have an alternative route to follow into existing parts of the city and onto Centurion Way via the green corridor boardwalk pathway. However this route would be particularly convoluted following a huge zig zag course. There was no indication of new access ways directly onto Centurion Way that new residents could use to enjoy our path.

The Linden Miller representatives stated that the cycleway along the spur road would have priority over traffic wishing to turn onto the adjoining streets. I find it difficult to imagine this being be a safe arrangement and I would personally lack the confidence to use such a pathway myself as a cyclist. It seems likely this unusual right of way for cyclists would not be recognised by motorists potentially leading to injury to a cyclists. From a motorists point of view I would also feel anxious about this arrangement. If many people are using the pavement it would be extremely difficult for a motorist to distinguish a cyclist about to cross a junction. It is also unclear how cars would approach a junction during times of heavy traffic. Would cars wait at the road junctions 3 meters from the road to allow cyclists to freely pass. I consider myself pro-cycling but I can’t imagine I could practically drive in such a way during pressured rush hour traffic. My gut feeling is that the cycle provision outlined in the plans falls a long way short of the standard of safety provided for cyclists by Centurion Way. I will ask Linden Miller representatives for precise details to how the junctions will be laid out so we can better understand how the various forms of traffic using the spur road will avoid conflict.